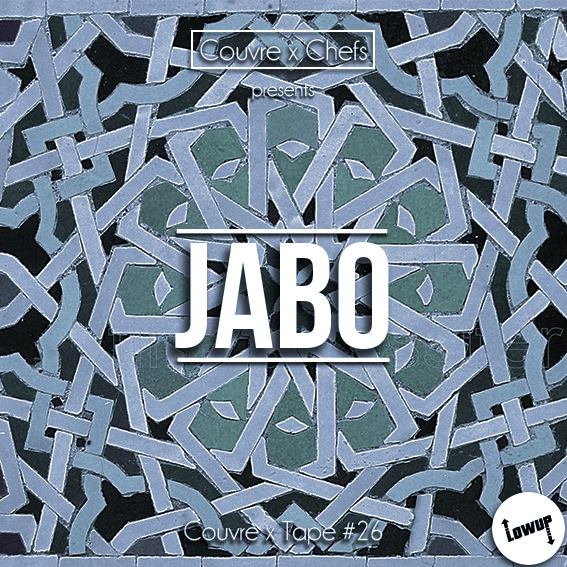 Couvre x Chefs is proud to present the Couvre x Tape #26, produced by Jabo, for many reasons.

Reason n°1 : Jabo is part of Lowup Records, record label from Brussels. Created in 2008, Lowup gathers Max Le Daron, DJ Mellow and Mr Orange, producers and promoters of an eclectic electronic scene, mostly of the global bass genre. Fond of exotic sounds, they don’t hesitate to pick their inspirations from the African scene, and broadcast them during their liveshows, or in their weekly podcast that we highly recommend to you all. In 2016, the crew seems to be on a roll. Present on the excellent compilation of remixes from Branko’s debut album Atlas (released in January) , Max Le Daron is already booked with Dj Mellow for Dour Festival this summer. But we sure gonna talk about that again.

Reason n°2 : Among this bunch of talents, Jabo isn’t left behind. The young prodigy in his 20’s already seduced A-Trak, Diplo and DJ Snake (just to name a few), with his unique style combining bass music and oriental sounds. After releasing his second EP Sonic Mizwid a few weeks ago, he’s offering us an exclusive mix. And that’s only the beginning.

CxC | Who are you and how did you get into music?

Jabo | Hi, my name is Jabo and I’m a producer based in Belgium. I started music 5 years ago. It took quite some time before my debuts. I was always trying to find my sound in the early stages and I was doing it just for fun. I didn’t know exactly what I wanted, but then I discovered the heritage of my roots (my parents are Moroccan) and since then I have made it my personal goal to translate this music to a broader audience.

Where did you get those oriental/arabic sounds from?

I find my sounds through lots of research and also while listening to music from my parents’ music collection. But it could be simply from a random Youtube video or a sound bank from an obscure Russian forum. For me it’s simple, its all about finding good and original sounds that reflect my tastes.

Can you tell us more about your debuts with Lowup and your first 2 EP’s (Harissa and Sonic Mizwid)?

These two releases are the result of discovering the rich sounds of the Maghrebian world. When I discovered Moroccan music or Arabic music in general  I was surprised that there wasn’t really lots of stuff that I could simply play in my sets, so I would try to put my twist on it. There is for example Acid Arab who does a great job in translating Arabic music into the Techno/Acid world but there wasn’t really a bass equivalent of that.
The two releases are  the perfect blend between my arabic roots and my eclectic influences all rolled into one. I took pieces from different arabic genres and sounds, and put it in to me.

I wanted to combine elements that had never been used together before. I like to do shit that people don’t think you’d be able to.

For example in Asilah, I put Tunesian mezoued drums with some crazy Turkish zurna sounds on top.

Videoclip of the track Pastilla, from Harissa EP.

I want to keep doing what I am doing now, just build upon that and develop Moroccan Bass with other artists. For the moment I’m focusing on finishing a new EP before this summer.  My main goal with this EP is to try to make more songs instead of club bangers only, getting more out of my comfort zone… I can already say that it will have some cool featurings on it. By then I’ll hopefully have enough songs to build a live set.