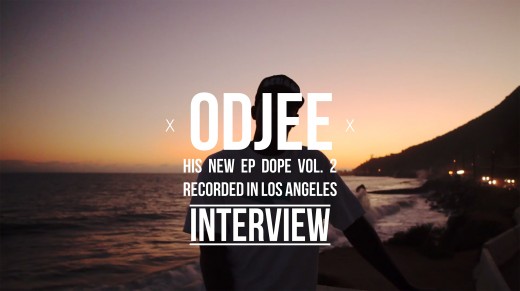 Odjee talked us about DOPE Vol.2 recorded in LA (interview)

We had the opportunity to interview the rapper Odjee this summer (read the interview here, french only for now). He was just leaving for Los Angeles to record his new EP: DOPE Vol.2. Just before the imminent launch of “the said” EP (Monday, November 10th), Odjee told us how was his trip to LA from where he came back with not less than two clips and a good dose of inspiration.

Couvre x Chefs: Odjee, recently we saw the clip of your last song King O, shot in Los Angeles. How can a rapper from Epinay / Rouen, end up turning clips in the USA?

Odjee: Thanks to contest the LA Culture, organized by Haute Culture and Générations, that I won last June. The prize was a trip to Los Angeles to record a project and shoot a clip, so that’s how it is explained.

Couvre x Chefs: Did you go alone, or did members of Notre Dame come with you?

Odjee: I went there alone, because the timing was tight for the other members but we will go as a team next time, if God wants it.

Couvre x Chefs: Concretely, in the USA, what did you do? Did you record new songs in the studio?

Odjee: I recorded DOPE Vol.2, which is the continuation of the first volume I released earlier this year and we clipped 2 songs from the project there. There will only be new songs on it and it will be 10 titles.

Couvre x Chefs: Until now, you had recorded all of your projects in France. As an artist, what does recording in the United States change? Are you full of confidence? It opens your mind?

Odjee: It’s special to be honest, it adds a little something and yeah it gives even more strength to continue working. After, I was already full of confidence as soon as I won the contest; I took it as a challenge.
In my mind it was going there and make a solid project. It opens a little more the mind obviously. It is a totally different environment than here, mostly the West Coast and it allowed me to see a number of things differently.

I like challenging myself when I start a new project, going on something new and always raise the bar higher.

Couvre x Chefs: Was the team that worked with you in the studio during the recording / mixing American? Did you discover a new way of working? Do you feel grown up after this experience?

Odjee: I worked with Americans, who are part of the team Haute Culture to contact for the project and one of them was half French so it was easier when we recorded, it enabled him to know exactly where I wanted to go.
No I kept the same way of working because I knew exactly where I was going with the project and what I had in mind.
I come out more inspired, I really stored many things there and I’m even more motivated.

Couvre x Chefs: I imagine that a stay there allows you to recharge your dose of inspiration… Did you take advantage of the opportunity to write new songs? Or all your songs were already on paper before coming to LA?

Odjee: I had a lot of songs ready or ideas in mind. Overall I knew what I wanted to do and the finished product that I wanted to have. However nothing happens as planned, I wrote a few songs there and finished a big part of the other songs I had started writing.

Couvre x Chefs: With Dope Vol.2, what should we expect? Is it in the continuity of Dope Vol.1 and Crunch Time?

Odjee: You should expect something else. I tried new things on level tone, flow, structures etc so it’s really something else. I think we can find a few “keys” of DOPE Vol.1 and Crunch Time but nothing similar. I like challenging myself when I start a new project, going on something new and always raise the bar higher.

Couvre x Chefs: Who did you work with? Are there any featurings planned? Were you surrounded by your usual producers who are part of your Notre Dame crew?

Odjee: Yeah, I worked with Kam0 and Chroniq Mess that were on DOPE Vol.1 and Crunch Time, there’s also an Ab_Musiq prod, so Notre Dame or guys we work with. For the rest I worked with new producers I know or I met. There’s DMT, who comes from Rouen and who is part of 122 Guinea PIGS, Marc R, who is from New York, Hokube that I’ve met this summer and with which I begin to work and Andrew Spector.
And for the featurings, no not this time, probably next time.

Couvre x Chefs: Should we expect to see coming new clips shot in the city of angels? Who is in charge of of the realization?

Odjee: Yes, I had the opportunity to shoot 2 clips there and the 2nd was released this week by the way. For the making of the clip, it’s the same team as in King O, Psycho Films, guys who are very very “hot”. Big up and a big thanks to them.

Couvre x Chefs: Did you take advantage of the opportunity to develop relationships with MC’s / producers of LA? Any “secret” projects on track?

Odjee: Not I didn’t have the opportunity to meet rappers there or make connections because the timing was a little tight and I was really into my projects. But who knows, with Internet today, we don’t necessarily need to be there to connect or make collaborations.

Couvre x Chefs: When is dope vol.2 arriving? Will the end of the year be stamped NDOE?

Odjee: DOPE Vol.2 is scheduled for November 10th! I’m really excited and proud of the project. I hope you like it!