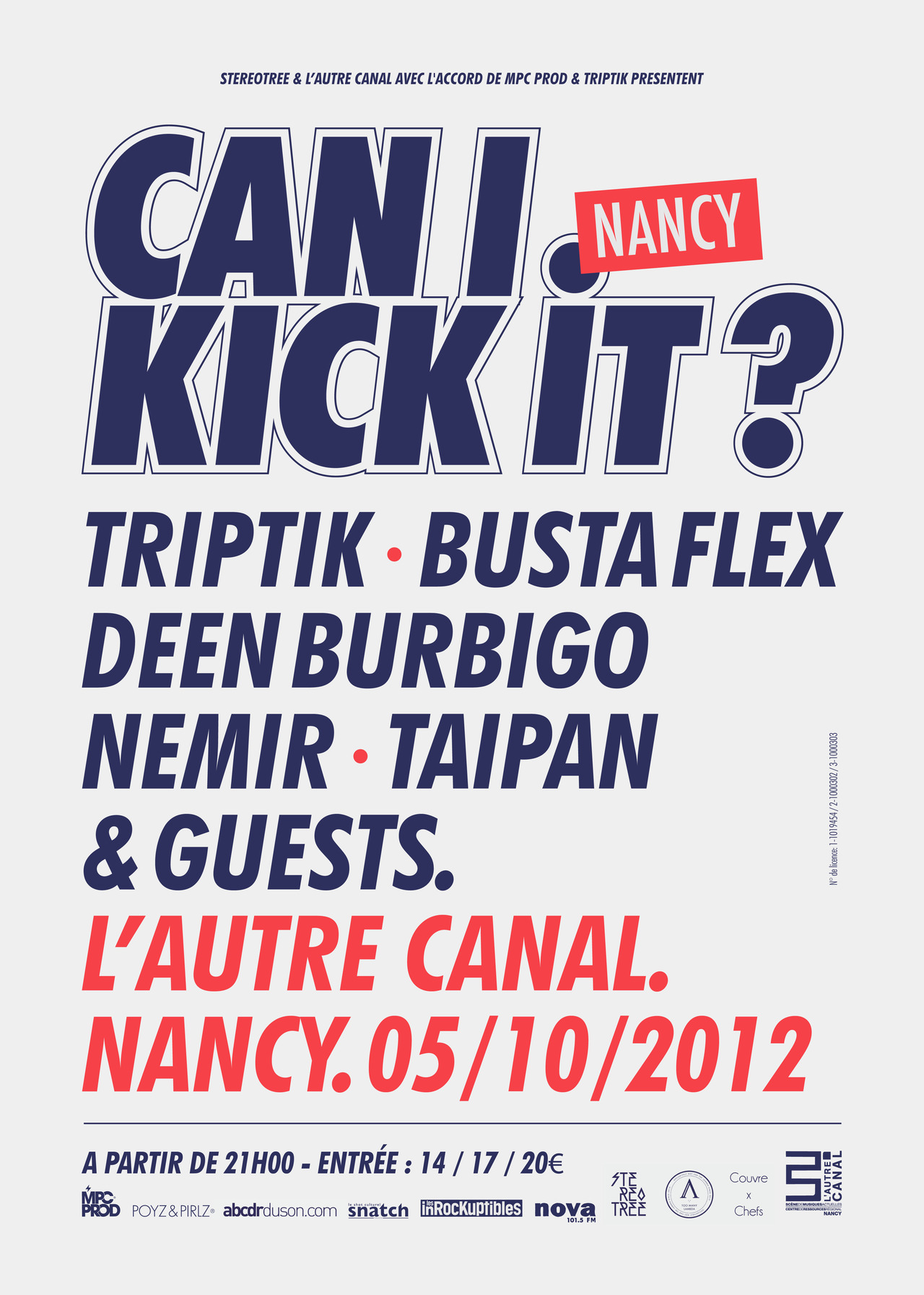 In 2011, unless you’ve been living far far away (and yet..), if you’re interested in the marvelous world of French rap, you might have heard about about the “Can I Kick It ?” shows.

“Can I Kick It ?” is a rap show concept, established by the crew “Triptik”, which aim is quite simple, damned efficient, and it was missing in the french nocturne rap game. Indeed, the “Can I Kick It Shows ?” shows provide not less than 5 hours of rap, during whom lots of MCs with different backgrounds come kick their lyrics alternately (or by groups), and then the DJs keep messing up, in a partying, relaxed, hip-hop atmosphere.

The first event was held at the Nouveau Casino on 6/25/2011, with a rough line-up, definitively oriented to fresh and fashioned artists at that time : Rimcash & Didaï, Djunz, 1995, l’Entourage, A2H, Cool Connexion, Nadir Greany, and, of course, Triptik, without forgetting some extra guests (Dany Dan, Oxmo Puccino…). You are deeply advised to have a look to the excellent promotional vidéos HERE.

We became fan when we heard about the compilation of those freestyles, remixed by The Shoes, HERE.

After a successful première, the Triptik crew and MPC Prod decided to prepare a second event, a few months later, on 11/19/2011. It has been a second success, featuring Orelsan & Gringe, Djunz, 3010, Joke, Némir, A2H & Mr. Xavier, Moudjad…

This is then that a first date was due out of Paris (on 5/12/2012), in Annecy, where were introduced the old-timers legends Disiz & Rocca side-by-side with Némir, Moudjad, Deen Burdigo and Triptik.

Back to school in September 2012, the business gets big. Indeed, in addition to a Parisian edition at Le Bataclan due on 10/28/2012, a huge tour is organized around the country.

One of the stage hits in Nancy, with Couvre x Chefs as humble and proud partner of this big event of real french rap, featuring the great Busta Flex, Deen Burbigo, Némir, the local for this stage, Taipan (who burns out the entire East and label Bomaye Musik with his punchlines since times), surprise guests, and, of course, Triptik.

via Facebook : Share the link of this article on your own facebook page, add to it one of yours own punchline and identify our facebook fan page in your publication. The publication have to be shared before Septembre 30th at 9:00 PM.

via Tweeter : same old shit, spread the link of this article, add to it your own punchline and send your tweet to @Couvre_x_Chefs. The tweet have to be shared before Septembre 30th too.

We will choose the two best punch liners. They won’t be on the stage on Octobre 5th, but in the pit for free ! Then we will edit some Couvre-Bureau (wallpapers with french rap punchlines) with their lines on it !

We hope to see all of our homies of North-Est of France there on October 5th at L’Autre Canal ! All the informations about the event right here.