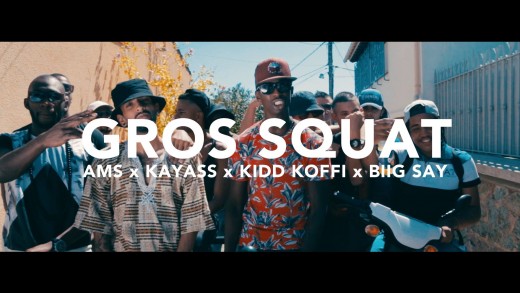 Kidd Koffi is a rapper that we have followed since the debut of his group Skvll Kaviar (he composed with Hoshi M) in 2013. Recently we were able to interview him for his connection with the release of his first solo EP Triceratops available at Haute Culture website in partnership with Generation 88.2.

On September 11, Kidd came back strong and surrounded by lots of friends, to unleash the internets with the release of the clip of Gros Squat that you can discover below:

Gros Squat on the French Riviera !
Gros Squat is the first single from the upcoming project coming from the rapper AMS from Cannes who invited for the occasion Kayass, Kidd Koffi and Biig Say. The clip is directed by Hansley and was shot between Pool Beach in Cannes, held this summer, and the town of Mandelieu-la-Napoule.

One video, a lot of artists and a lots of projects :

Impossible not to relay this clip we have found really hot. Moreover, it allows us to give you a bit of news and news from some of the MC’s on this song:

We have noted the development and work of the Kidd Koffi flow  on this title, quite different from that to which he has accustomed us on his previous EP Triceratops and the appropriate use of auto-tune. And if you enjoyed it so that much, Kidd is preparing a mixtape coming towards the end of 2014 / early 2015 entitled Satan vêtu de satin to be in the same musical vein. Also featured on this collaboration mixtape with Kayass and AMS. Then comes Aldebaran, a new EP, which this time will be more in line with the atmosphere developed in his EP Triceratops.

Biig Say released on November 11 the first Black Fonce mixtape which you will surely talk about.

Together, Kidd Koffi and Biig Say announced a joint project: SIIDKOFALL. A series of freestyles, published at regular intervals, entitled “MOWFOW” (gimmick used by both rappers) should be released in the near future. Each freestyle will be clipped and all will be included in a mixtape.

We know there is a lot of artists and a lot of different projects in a same article but we recomend us to pay attention to them !

BONUS : find below the full live of Kidd Koffi and his homies (including Biig Say) at L’Autre Canal Nancy during the DJ set from yours truly aka Philou Passe Des Disques last june: