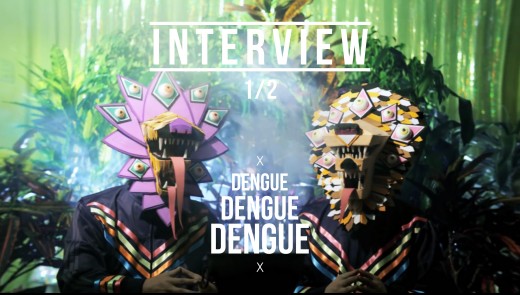 I was able to spend two years in Mexico, during which I took many unexpected musical slaps … the electronic scene in Latin America is in turmoil : new styles appear all the tim , event organizers are increasingly more creative, the independent labels are blooming … in all of this movement, there are producers of electronic music who have had a brilliant idea: mixing influences from Latin American music ( cumbias…) with music codes we are most familiar with (techn , bass music) . The results of this merger have different names: digital cumbia, nu cumbia, tropical bass, ruidoson… at Couvre x Chefs we are big fans and so we will start to talk to you a bit about it all.

In Peru, the flagships of this hybrid scene are called Dengue Dengue Dengue, I took a tropical discharge live in January last year during one of their first performances in Mexico on Day Off. A little over a year later, it is at La Bellevilloise in Paris that I finally got to meet and discuss the new electronic music scene of Latin America and the beginning of their exponential career.

Between tropical bass and cumbia jungle

Couvre x Chefs: Hi Dengue Dengue Dengue ! Can you introduce yourself and try to explain to the French the music that  you are doing?

Rafael: And meRafael , we are the group Dengue Dengue Dengue and what we do is close to cumbia at first, but now we want to explore other ritmos nativos  from around the world and merge them with electronic music .

Rafael: For example in Latin America  we could talk about cumbia , in the case of Peru, Afro Peruvian music or landó … but it is not only music from South America, this term also refers to rhythms with African roots …

Felipe: … because ultimately all this music is of African influence. This is the basis of everything, the root.

CxC: You define your music as belonging to the current tropical bass?

Rafael: Yes, as Felipe said, especially in the beginning … now we appropriate ourselves rhythms or others not only from that  tropical influence. But as pointed Felipe, they are nativos ritmos that have a common root.

CxC: You started out with a series of remixes, then a first album, La Alianza Profana in 2012, whose influences were rather Amazonian cumbia or chicha. Your recent compositions as R2, Lokumba or your last EP to date, Serpiente Dorada , have other influences, such as zouk bass or dub, and reflect a change in your musical research . You’re constantly experiencing new sounds?

Felipe: Exactly! Moreover, what happens in this current so-called tropical bass or all this new music “native” or tropical root is called as you want … is that new types appear all the time. Ourselves, we often play live so we did not want to get locked into one style, we try to experiment, try things, and see what happens…

Rafael: … in fact, it is highly influenced by Internet actually. To discover new music the easiest media is internet, new stuff out every day … but it is not always new rhythms. Sometimes these are rhythms that have always been there but at some point someone used them again and you think “Wow he killed it!”

Felipe: … then combined with electronic music, as you go back a little in every sense…

Rafael: … for example, what is happening right now around the current African music including zouk bass etc…. it has plunged us into the heart of the Peruvian culture, not to cumbia , there is a rather interesting parallel with Afro Peruvian music …

Felipe: … that ‘s where comes our R2 such as : inside there is a sample of a musician called Zambo Cavero (note, Arturo ” Zambo ” Cavero) who died there shortly , it’s been a few years. This is also why the song is free; melody is not us but the sample so it has been a problem.

Rafael: Zambo Cavero makes the Afro Peruvian music. In Peru there has been substantial immigration from Africa at a time, many came to be slaves. When they were released, they gathered in a town south of Lima called Chincha . This is where many come from mergers.

CxC: This has something to do with the Amazonian cumbia?

Rafael: No, it is something else. Amazon is cumbia cumbia who came from Colombia and Peru that arrived in the jungle, the Amazon rainforest. When it happened, there was a very strong oil exploitation in the forest, there were many foreigners, especially Americans. It is them who have made electric guitars, synthesizers , rock … and all these ingredients are mixed with cumbia to create a very unique sound that has not gone wrong in 6 or 7 years, it’s that that we call the Amazonian cumbia . Instead of integrating accordions or other instruments, it was the electric guitar. And the influence of hallucinogens such as ayahuasca, the trick became downright psychedelic!

Felipe: And after all this current moved to Lima where he merged with Andean music and music from Lima to give chicha.

Rafael: We also love good shisha , but focuses more on the other part of the Amazon rainforest.

CxC: … on the Amazonian cumbia ?

Felipe: Exactly. What happens in the last songs we did, other rhythms are used while still keeping many influences: the psychedelic side of cumbia , in which still maintains the basis of what we do, but also the melodies…

Rafael: … we do not want to repeat what has already been done. This is what we started doing a little at first, but mostly we try to grasp the idea that these people had when they made ​​at the time, and combine with other elements.

CxC: What you think of the term “global bass”?

Rafael: it can include everything and anything. When someone talks about “global bass” everybody thinks they mean cumbia bass or bass … but zouk, drum n bass, dubstep is also the bass music! It is also “global” after all; it comes from other parts of the world.

Felipe: After there is also dub and other rhythms that can be described as a native point of view. These rhythms again come rhythms that are born in these parts of the world.

Rafael: I think that originally all these genres are part of the same whole but at some point there was a differentiation between bass music and global bass … in fact it’s the same thing, and eventually they will merge.

Felipe: It’s just that what happens in one part of the world, well you you’re doing it on your side with your sauce … spicy! hahaha 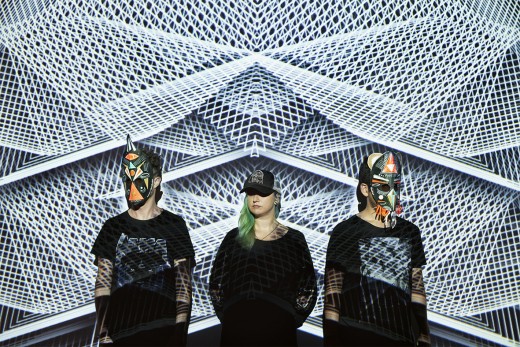 Rafael: We have joint projects and other friends from 8-10 years at least. With one of these projects we went to a festival in Argentina called Trimarchi, and at this festival we saw guys play such Chancha via Circuito, ZZK Records label . When we heard him play and another called El Remolon it was crazy … I had already seen mergers of Latin music with electronic music with Señor Coconut for example, but this was the first time I saw it in a club atmosphere, with people dancing! Obviously it was not going to do the same thing, but we immediately thought we could do after our own version of this mixture. They do it with cumbia villera (the most common style of cumbia in Argentina), so we thought we could do with our own music.

CxC: You have a very interesting visual proposal with the work of VJ Sixta . Wallets, artworks, masks you put on stage … You are all three designers, it is important for you to provide a complete project: music + video?

Felipe: Of course. It closes the circuit, it forms the concept that separates the dj from the live act… the visuals are part of the concept. Well, it is also a way to differentiate this project from other one have.

Rafael: the type of music is ready for something fun to play a little with the colors etc … there are other types of projects that are “reserved», but with tropical music we want to show colors …

Felipe:… yes it is something else. Dj set is varied; it is a kind of mix of cumbia and other rhythms…. This is different from live.

CxC: You also are doing projections when you are already set?

Felipe: Yes! Finally, its half live dj half live set mostly because there are pieces that remixes live, others where it adds another rhythmic etc…