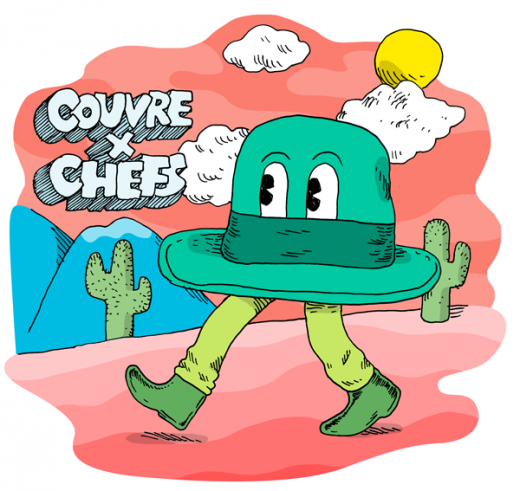 You, as a an assiduous Couvre x Chefs reader (which we hope you are ! if that isn’t the case, then welcome !), you may have already read Pierre Thyss’ name on our digital pages. Indeed, the man’s work has caught our eye for a while, through the wild illustrations he produces for the Musique Large label (artworks for dj Onelight, music videos for band Baron Rétif & Concepción Pérez inter alia…). Following the release the Teki Latex’s latest music video (a collaboration with Eero Johannes, published on Sound Pellegrino), finely illustrated by our man, we wanted to learn more, so YOU could know more about him ! Ladies and Gents, here comes, exclusively for Couvre x Chefs, Pierre Thyss’ first interview !

Pierre Thyss – Hi CxC. I’ve been drawing since I was a little kid, but according to my mum when I was in infant school I used to draw “potato characters“, i.e. every part of the body just looked like a potato which was linked to other potatoes with different shapes. The other kids were still drawing stickmen.

I also remember that I was quite good at designing the red and white rocket from The Adventures of Tintin’s “Explorers on the Moon“.

CxC – How do you define your style ?

Pierre – I often tend to use a “cartoon” style, but I also try to diversify my works by going towards a more serious and more technical illustration style…. I like the super-simple press-like drawings as much as much more complex illustrations you can find on the cover of science-fiction books, so it’s a kind of mix of all this.

Seing my drawings, my grandma said it looked “very artificial but also very expressive at the same time“. I liked this definition.

CxC – We discovered you thanks to your cartoon, “Badouine“….Can you tell us a bit about this character ?

Pierre – “Baldouine is the sequel of Seinfeld and Lost, slightly failed but well“, that’s what Nicolas answered me , who he had the idea to do the cartoon using this form. He found the name Baldouine on a site on which one can generate a name to call their horse depending the year. 2010 was the year of B’s, so….

I wanted to create the “Adventures of the horse DJ” : it would surely have been a bit more fun, but it would have also sucked and appart from the title I didn’t really had any ideas.

I just had made this drawing of a horse wearing a costume (which became the cover of the Baldouine cartoon) and it inspired him. Baldouine is just the representation of a cool guy who’s not really smart and who undergoes what happens around him. I think we found the idea after we watched “Weekend at Bernies“, where there’s this guy who’s dead all along the movie but they make him wear a pair of sunglasses and have fun with him. Appart from that, it’s a kind of tote, and overall we made this cartoon just to have a good laugh together, even though it has it was funny to put the pages online and see the people’s reactions.

CxC – You also happen to do animated cartoons for music videos, as you did for BR&CP or more recently Sound Pellegrino. How do you approach those different projects ?

Pierre – We had include the guys from BR&CP in the Baldouine cartoon just for fun, so they wanted us to make a Baldouine-like music video. I work a bit with Adobe After Effect and at the time we made this music video I was learning how to use the software, so it was a real DIY, each scene was a fun challenge.

Then there have been a music video for King Knut, 2 music videos for the band Jil is Lucky, co-directed by Edouard Granero and Thomas Levy, with higher-quality animations included. Shootout to them.

As for Sound Pellegrino, they had the idea for the music video, I had made a drawing of Teki Latex and her friend Betty, and they wanted to keep the same kind of design for the music video. They wanted to illustrate it in a very simple way. Émile Shaidi (the label’s manager) had this idea of thumbnails that would scroll like slides. I’m a fan of the label I’ve been following Teki Latex since I was a teenager so I didn’t have difficulties finding inspiration. Drawing the people around me in a funny way is something I have been doing forever to it was really easy and pleasant to do. I’m really happy with the result and the people’s reactions.

CxC – Last year you released two tees, produced for the Abaka shop in Nice, you produced illustrations for Qhuit, and you have even seen your works on the internet for Adidas. Do you consider any more collaborations with fashion brands ?

Pierre – Yes, it would be cool to work with a brand, I’d like very much to produce patterns for clothes, for example. It’s something I think about a lot and I hope I’ll have the chance to do it. Illustrations on a shirt, sneakers, a scarf…that’d be great !

Appart from that, I already have a cool project in the pipes with Sound Pellegrino Materiale ;) Oh I’d be really proud if I could design a collection of beach towels !

CxC – Your characters always have a special identity. We’ve talked about Baldouine already, but there’s also this bling-bling king we saw in the BR&CP music video, and his twin brother in King Knut’s video. All of them are part of a universe filled with more or less normal humans (refer to the couple on the tee that Pierre designed for the Abaka shop for example). So what are your inspirations ?

Pierre – In fact, the bling-bling king in the King Knut video isn’t the BRCP’s one twin brother, as they are the same character. My inspiration comes from what I see everywhere and at any time, so it’s very wide, but recently, what I prefer drawing is girls.

I really enjoy looking at people in clubs, there are always amazing apparels. On a monthly basis, I produced drawings which are published in Têtu magazine, it allows me to draw funny clothings. I’ve always enjoyed observing the little details in the people’s clothes. Those small simple stuff that enhance their look, it’s the kind of efficiency I’m looking for in my work.

Pierre – Maybe contemporary dance, but I would have to be drunk all the time.

CxC – There are lots of references to hip-hop culture in your drawing. Is there any particular rapper or a band you have never drawn and that you’d love to ?

Pierre – It’s true that I make a lot of references to rap music, and I enjoy scrutinizing the people’s clothes. The rappers are great for this, those guys always have amazing looks, like Slick Rick with his diamond-made eye patch, it’s the kind of things that I remember from my teenage years. I’ve never drawn Slick Rick, so I guess I could draw him.