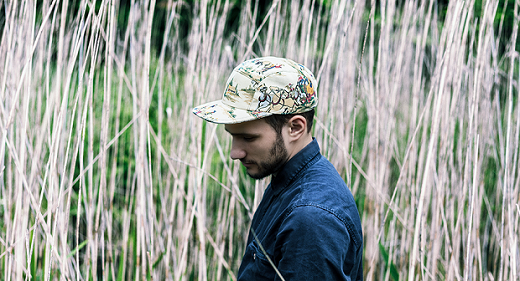 Jean has founded his own brand of handcrafted caps. Couvre x Chefs met him and details his story.

Two years ago I met Jean Laumet, who was at the time a salesman in the very good Culture Denim shop in Lille, France. He was passionated by headgear, and more precisely 5-panels, so he had told me about his project of creating a cap brand.

The said project was named Neypo (Poney, reversed). Much later, during one my “geeking” sessions, I discovered that he had shaped his project for real and launched a caps-line. I absolutely had to go back to Lille to meet him again so he could narrate the venture’s story.

We had an appointment in the Neypo workshop in Lille, by a November saturday afternoon. When I arrived on site, Jean was working in the shed with his assistant. He offered me a coffee, and we started chatting.

On top of the firm, a man, Jean Laumet, 24, who has always been attracted by art as a whole, and more precisely by fashion. He had graduated with a Applied Arts “Baccalauréat” (= equivalent to the British A levels) at the ESAAT in Roubaix (Advanced Applied Arts and Textile school) and a Bachelor degree at Beaux Arts in Valenciennes (France), and then integrated the prestigious Saint Luc school in Tournai, Belgium.

The latter experience only lasted for 6 months, as Jean quitted the institution because he thought it looks like a “factory”. Passionated by street-culture, he didn’t want to be just a number over a school-file and having his work judged by people that could not evaluate his work properly.

Jean then entered in a phase during which he piled different jobs in Lille : he worked at Quick for a short time, then as a salesman at Superdry (a ready-made clothing brand), then at Culture Denim (a multi-brand store, oriented toward street-wear). It’s during this retail experience that he started being interested in fashion, products (manufacturing and material quality, etc.) and got to know how the textile industry works.

There, he saw the emergence of french street-wear brands like Qhuit and Sixpack, and discovered the close relations that links clothes and music. As a street-wear enthusiast, he also discovered a lot of new brands, which motivated and encouraged him into going through his personal project.

Neypo had been hanging around in his mind for a while and he was thinking about it more-and-more. He got interested by the caps retailed at Culture Denim, by the material used and the manufacturing process…Coming back from the Berlin show Bread and Butter, he took his decision : he quitted his salesman position to devote his time to Neypo.

[Established in 2001, the Bread and Butter show is a bi-annual must-go exhibit for the street-wear professionals. It takes place in January and February, and all the major brands expose their products. Buyers from street-wear shops then come to discover the new collections and purchase. After a few years in Barcelona, the event nowadays takes place in Berlin.]

In June 2013, Neypo is filed officially and Jean Laumet works full-time on his new project. He isn’t the only one involved in this new venture. He recruited a few friends and constituted a team of four :

Jean focuses on a precise type of cap : the 5-panel, whose name comes from the fact that it is actually manufactured from 5 sections of fabric material, sewn together. Five-panels are notably appreciated by street-wear fans those days.

Apart from a few specific pieces which are supplied from China, 80% of the material come from market places in the North of France, especially the Wazemmes market. Jean’s friends also bring material back from journeys around the world. That is where Neypo’s caps appeal come from : each caps series is manufactured from unique materials, that won’t be used again. Each model is thereby nonesuch (and numbered !).

In the beginning, Valentin and Jean did not had any choice other than set-up their workshop in Jean’s apartment, in the sitting room. Each cap was entirely hand-crafted and manufactured on-site. It’s a craft way of manufacturing, that Neypo’s team absolutely want to maintain.

To celebrate the launch of the brand, a party has been organized in the La Boîte Collector shop in Lille. On the occasion, an exclusive collaboration series was manufactured (and sold-out quickly, of course !).

The brand’s aim is to gather a maximum of people toward the 5-panel and prove it is not only reserved to street-wear fanatics ! Neypo’s target ? Anyone ! Young people, old ones, fashionable or not… Jean just doesn’t want to save his products for a “typical-profile client” and, on the contrary, wants a maximum of different people to wear his 5 panels…and if his clients have nothing to do with street-culture, then, be it !

The Neypo team was even present at the nationally famous Lille clearance-sale, via the La Boîte Collector’s stall. You could then discover the different models available, buy your cap or just acquire a fancy wallet !

From the sitting-room to the boutique shop…

The Neypo project took a major turn when the brand integrated  Maison de Mode Lille’s structure (“house of fashion“, a retail which hosts young and new fashion designers and manufacturers) last September. Jean then won the Maison de Mode Grand Prix contest. His prize : a real place to work !
The team left the sitting room to move to their own workshop. A lucky privilege for a young designer, as the new place acts as both a workshop and a store where a space is dedicated to the collections.

[Maison de Mode is a structure that aims at developing textile creation in the North of France (an area which has been historically linked to the textile industry), by setting up young brands in their shops and monitoring designers in their development (through helping in the management, raising funds and building a supply-chain). As an example, aside the workshop-store place, Maison de Mode provided Jean with model makers that can design the patterns of the coming Couvre-chefs (headgear).]

…To fashion shows and artist sponsoring !

Among the projects on which Jean and his team worked on, one of the most enthusiasting is the 5-panel cap specially designed for the fashion show parade of designers Tristan Besnard (La Garçonnière) and Justine Clenquet. It is, indeed, the only model to have a large  “Neypo” brand-tag printed on it. It was a necessity so the name would be visible by all during the catwalk show, but it is a single circumstance for the brand, as it usually privileges discretion.

Apart from this specificity, those caps were different as they had jewels hanging to the panels and visor. The result is quite unusual but we must underline those designs had not been conceived to be worn as daily-life caps but during a specific show. A challenge that Jean wanted to face. Now this is what we call risk taking !

Finally, we are very enthusiastic concerning that collaboration between Neypo and Lille rapper Pink Tee (who has just released his new EP “C.O.O.L” available here) ! The brand has indeed designed a unique model for the rapper, and, as we know, the collaboration is just beginning and there might be else to come !

The music video of “It’s Yours”, filmed in Lille ! Track is included in the “Eté Bouillant” (Boiling summer) mixtape from our homie Philou Passe Des Disques.

Neypo is a very promising brand, and Jean has numerous new projects coming, including the launch of reversible bob-hats ! A lot of ideas that will be shaped progressively, with no hurry. Jean works as he feels and take new challenges as they come.

The caps are available at the Neypo shop (31 rue Faubourg des Postes, Lille, France) as well as on the brand’s website here and you can follow the launch of new series on their Facebook page. Of course, Jean is looking for retailers who would be interested by his project and who would want to market his collections.

This the key of Neypo’s development : selling about 15 caps per month, the venture’s business isn’t balanced but Jean wants to reach the equilibrium point as soon as next summer. For this, he will have to expand his distribution and manufacture more caps. Today, 50 caps are produced each month in the workshop but the founder wants to speed up by recruiting interns. Neypo’s aim ? Being able to launch one new cap model per week !

This story is the translation of an original article by : Alex.