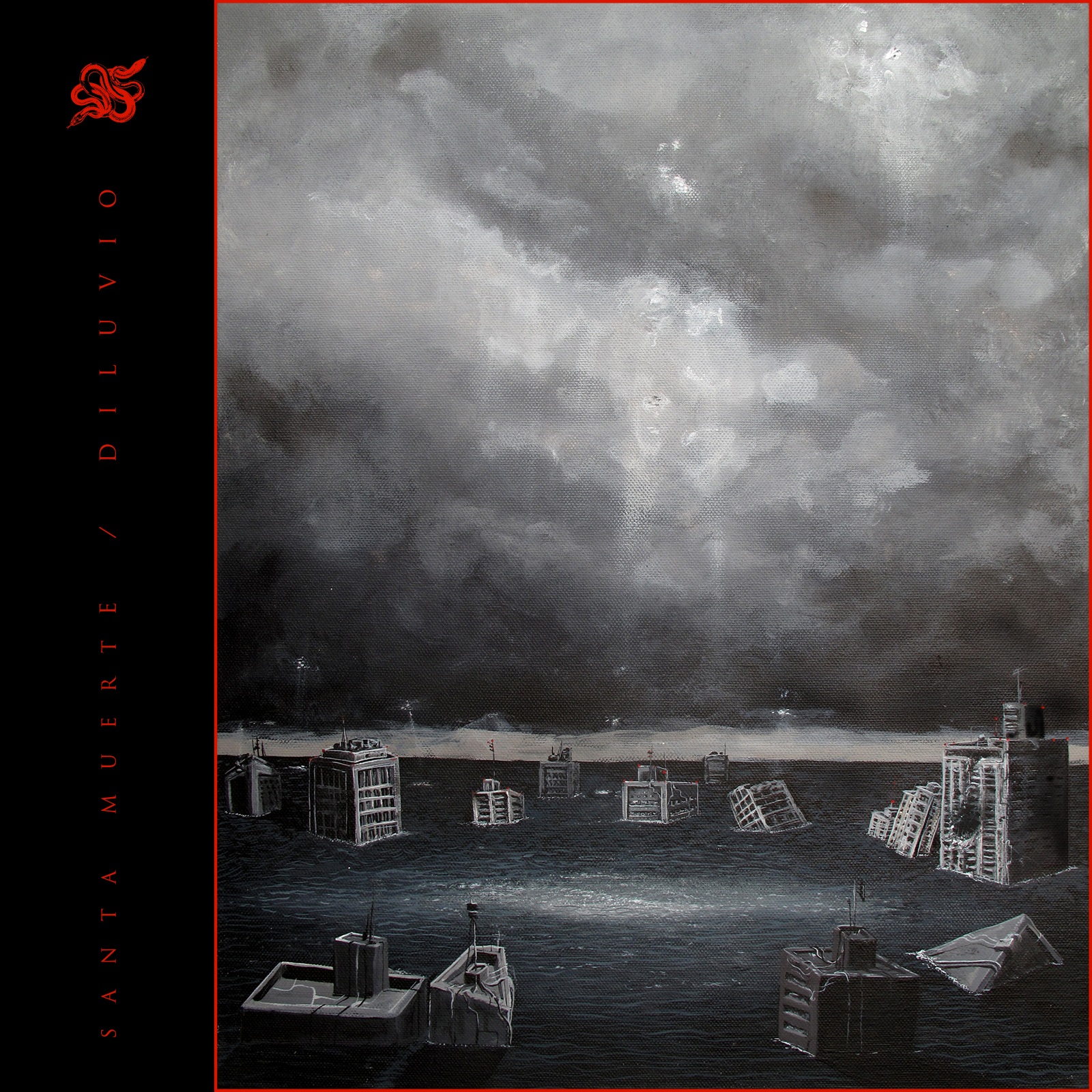 Lao and NNOA support Santa Muerte on their LP Diluvio

Over the years, the duo composed of PanchSM and Sines has truly established itself as a driving force behind the club/global club/hybrid club/post-club scene, whatever you want to call it.

The first tracks signed Santa Muerte (after the two members have already earned a name for themselves as solo artists) appeared within club-ready packs of bootlegs and edits. On these releases, PanchSM and Sines quietly set the stage and refined the style of their project and worked for the future of it. These packs, moreover, did not fail to influence a large part of current productions under the “Gothic Reggaeton” banner, or “Obscure Dembow”, or even “Dark Perreo” etc…, which could be defined as a sub-branch in its own right of the club scene mentioned above.

At first, they released self-produced records, then one via GHE20G0TH1K, which finally became an almost annual compilation, “Santa Muerte & Friends Bootlegs & Edits”, published on their own label launched in the meantime: Majía.

The next step after these bootlegs was the launching of their label, Majía, which we do not need to present anymore. Revealing new artists like NNOA or Korma, editing EPs of other actors of the scene like El Plvybxy or Omaar, counting collaborations with Deltatron, Russian Wulffluw XCIV, Lao …

Of the 10 tracks that make up Diluvio, the duo plays with genres and explores without restraints. Sometimes Baile Funk (Exus, Laceration), Dembow (No Drip), Reggaeton (Diluvio, the eponymous title), Grime (Aerial Rhythm) or Gqom (Ritmo De Selva), Santa Muerte feeds on popular underground music trends and draws a portrait in the form of an exquisite mashup of their musical universe. The whole album is turned into a coherent masterpiece by the inimitable dark vibe of the duo. The dark ambiences, the signature of the Santa Muerte project, arrives here at its paroxysm, especially on the strangely extatic interlude Noah’s Pain which will send chill down your spine.

Regarding collaborations – a subject obviously dear to Santa Muerte given the energy put into their label, their compilation and their residency on Rinse FM, the album is not shy on it. In fact, there are featurings with Lao, NNOA, Zutzut and TenTwentySeven, several artists whom have all collaborated with the duo at one time or another. The artwork is also signed by Zutzut, for which we can only recommend that you follow the Instagram account dedicated to his activities as a painter: @nunezferrara.

Given that an article rarely comes alone in our blog, we have the immense privilege to give you an exclusive preview: the track Aerial Rhythm. Composed in collaboration with NAAFI’s affiliate Lao and NNOA, the song is an instrumental grime instrumental banger. We recognize the precise je ne sais quoi of Lao, which can be identified on many of his songs which have forged his identity as a club producer.

Diluvio raises another important point: how to approach the album format for a club music project. Certainly in a different way from the EP or mix (club or radio), and Santa Muerte takes up the challenge hands down. The duo has been able to build a well-tuned ensemble, which can be heard in one go in the intended order of the tracks, where the intro, the instrumental tracks, the interludes and the outro make sense as a whole and let you breathe between the more intense moments.

Furthermore, the most observant of you will note that Diluvio’s outro (the track Prayer) was in fact the very first title published on Santa Muerte’s SoundCloud 5 years ago now. An ode to THE Santa Muerte told by Monterrey’s DJ and Club Viral associated producer Lil Tantrum. The circle is complete.

Diluvio LP Santa Muerte will be available August 23 at Majía and you can already order the physical edition (CD) on Bandcamp.