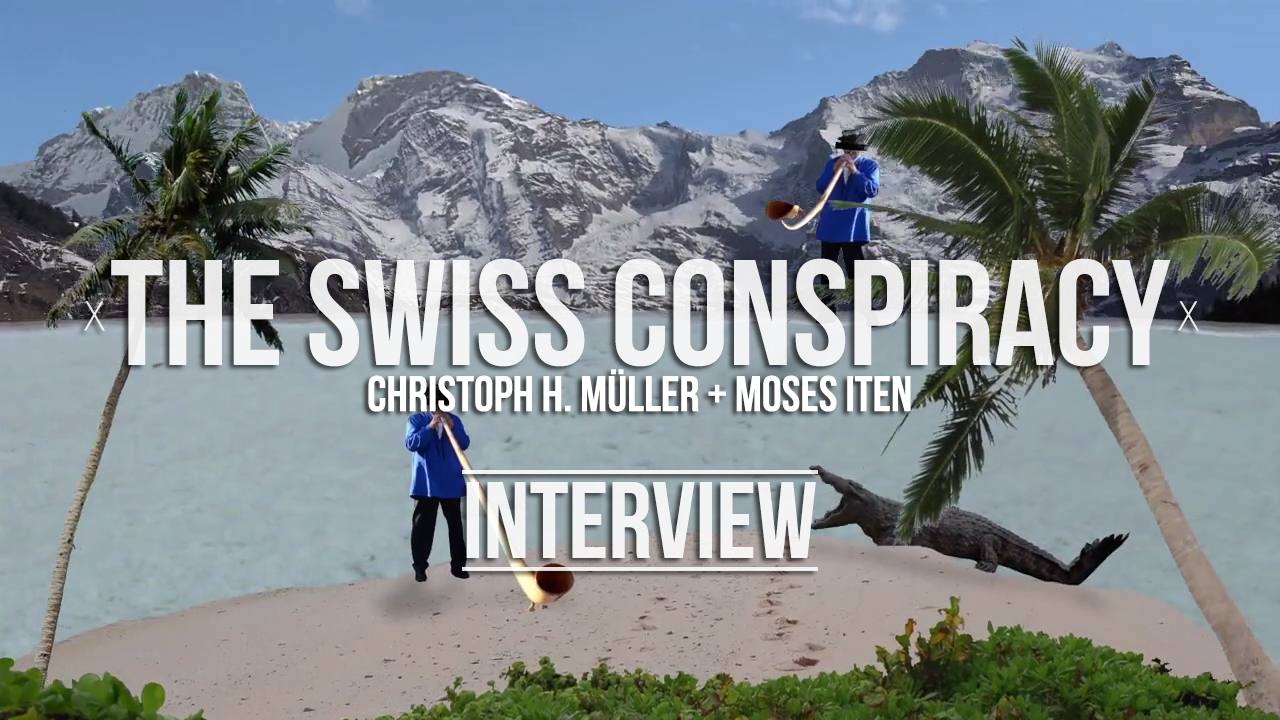 The Swiss Conspiracy: “When the Alps meet the jungle.” (+ exclusive FREE remix)

The Swiss Conspiracy is a relatively unique music project, one of a kind. It’s the meeting of two musicians: Moses Iten (member of Cumbia Cosmonauts) and Christoph H. Müller (Gotan Project, Plaza Francia with Rita Mitsouko singer Catherine Ringer).
Forming The Swiss Conspiracy, Moses and Christoph have chosen to highlight two of their common points: first, the fact that they are both very interested in Latin American rhythms in their respective projects (taking into Argentine tango Gotan Project, and cumbia, for Cumbia Cosmonauts) and second, the fact that both are of Swiss origin. Therefore it was natural for the two musicians to set up a project that would be to look for the hidden roots between Swiss folk music and Latin American rhythms! Not so obvious filiation? Well when Christoph H. Müller explained it to us in an interview it was immediately much simpler than it looks.
BONUS: Alpine Cumbiero duo have just released their second EP Délire Nostalgique Vol. II and had the extreme kindness to offer exclusively to CxC readers the remix of their song Alarm! Alarm! realised by Chico Sonido! The title is available at end of article.

The Swiss Conspiracy:
“When the Alps meet the jungle.”

How would you describe The Swiss Conspiracy?

The Swiss Conspiracy is an hybrid electronic music project inspired by the sounds and memories of the country of its two founders:

Switzerland, a much more exotic country than it looks like …

Kind of a mark widely known and unknown at the same time. Moses lives in Melbourne and myself in Paris so we do have a certain distance from our country now. For a long time the music both of us were listening to was inspired by traditional music and folk found elsewhere (particularly in South America). So we thought why not try to be inspired from our own culture? A bit like what is being done now, by young producers from Argentina, Colombia, Mexico etc.

What is the idea behind The Swiss Conspiracy?

There are two axes:

1. Before being a rich country and land of immigration, Switzerland was a poor country, especially in the mountain areas, with lots of emigration. The Swiss were forced to seek happiness elsewhere. They took with them their music and culture into South America, North America, Australia etc. We are convinced that this emigration has participated among others in South America – the region that interests us both particularly – in new musical styles born of the meeting of immigrants from Europe and the populations of African and Amerindian origin: cumbia, the forro, the chamamé etc … and even tango.

We try to artificially recreate the meeting of both cultures by crossing rhythms, melodies and sounds of home with the rhythms and sounds of the Americas and Africa. A kind of cultural boomerang … and a geographical proximity: the Alps meet the jungle / the Andes. All with the tools of electronic music.

2. There are so many clichés about Switzerland, we try to play with them, we make fun of it a little, too, there is not seriousness. The culture of discretion and secrecy for example … the band’s name comes from a B-movie from the 70s directed by Jack Arnold.

How was the project born?

One day in the mountains in Switzerland – in a restaurant – I heard a typical Swiss folk song. The sound was not very good and I heard a lot of bass. I realized that the bass line was much like the bass lines of cumbia. So I thought we should try to make cumbia with sounds from the Swiss Alps. I suggested to Moses – I had met in Australia during a tour of Gotan Project – to do this project together. As half of Cumbia Cosmonauts he was best placed to do it! Thus was born the song Cumbia Alpina that you can find on Vol. I series Délire Nostalgique.

The clip of Cumbia Alpina is completely crazy!
The group is composed of Christoph H. Müller (Gotan Project, Plaza Francia), and Moses Iten (Cumbia Cosmonauts, Saca La Mois DJ!!), how did you meet and how did you decide to go a group together?

We met in Melbourne in 2007 at the first Australian tour of Gotan Project. Gotan were looking for a vocalist to sing on a piece live and Moses had made the connection. We spoke in Swiss German and stayed in contact afterwards. We started The Swiss Conspiracy in late 2010 early 2011, but due to all our other activities it advanced very slowly … and the distance of a few tens of thousands of kilometers does not make the task any easier, despite the speed of the Internet!

You publish the series of EP Délire Nostalgique, why pick this name and what does it mean?

This name comes from the mythical Ranz des Vaches a melody so powerful in the 18th century – after hearing it, the Swiss mercenaries were under the Delirium Nostalgicum (Délire Nostalgique) and deserting the army to which they were working … so we are looking for this music which can have such a strong impact! But this is mostly of our own yearning sounds from our childhood and of our ancestors, the “saudade” as the Brazilians. It’s a little bit of a crazy project, right ? (Author’s note: YES)

You just released Delirium Nostalgia Vol. II, before listening to it, can you introduce this EP to us?

On this EP there are three new original tracks with a remix for each as well as a bonus track (Bobrun that was released at the time of the Olympic Games in Scotchi) As always the songs are quite different.

The first, Carillon Blues, is based on a melodic loop of a chime in the Valais (Author’s note: canton of Switzerland, situated in the southwestern part of the country). These chimes are handled with both hands and both feet! A strange instrument both primitive and complex. Our friend Sue Han Lee (from the band Los Dos) has added well-western guitars. The spoken voices come from an interview with visual artist Alberto Giacometti (Swiss himself). Giacometti was – like many artists of his time – heavily influenced by the art as primitive (rather than what himself considers exotic).

Alarm! Alarm! is based on the sounds of sirens sounding every first Wednesday of the month throughout the country. It reminds us of the 80s Cold War 80s atmosphere, the security paranoia of a country that has not experienced war for a very long time. This is also why we have produced this piece in an electro style that’s very 80’s, while also inspiring rhythms and the baile funk sound coming from Brazil.

Quatro mix of Swiss folklore instruments with tribal rhythms (3Ball) from Mexico and speaks about the polyglot side of the Switzerland. This small country has four official languages and dozens of dialects! What’s funny is that the voices we hear speak Brazilian Portuguese …

Delirium Nostalgia Vol. II includes remixes signed by Chancha Via Circuito Chico Sonido and Acapulco Zombie. How did you choose the artists?

Chancha Via Circuito was an obvious choice for the title Carillon Blues. The song is very close to his own work and is one of the few producers/DJs who know how to make grooves in three steps (3/4, 6/8, etc.). I love what he did with the title!

Chico Sonido had already made two remixes for my project Plaza Francia. They were remixes of tracks recorded live last summer, and I liked what he had done. You can listen to it on our SoundCloud page. He transformed Alarm! Alarm! into a dancefloor bomb!

Acapulco Zombie was met by Moses during his last tour in Mexico is a very young producer with great talent. We really wanted this piece to be remixed by a Mexican …

Finally, what are your next projects?

With The Swiss Conspiracy we will tackle Vol. III of the Délire Nostalgique series that will certainly be a trilogy. I’m also continuing with concerts for Plaza Francia (with Rita Mitsouko singer Catherine Ringer), the group with which I am preparing new songs as well. And, last but not least, in September I will release an electro/ambient album with one of the great pioneers of electronic music Roedelius (Cluster, Harmonia). The album is called Imagori and will be released on the German label Greenland.

This one is an exclusive present for Couvre x Chefs’ readers: the remix of the track Alarm! Alarm! produced by Chico Sonido, free download right now on our brand new SoundCloud!