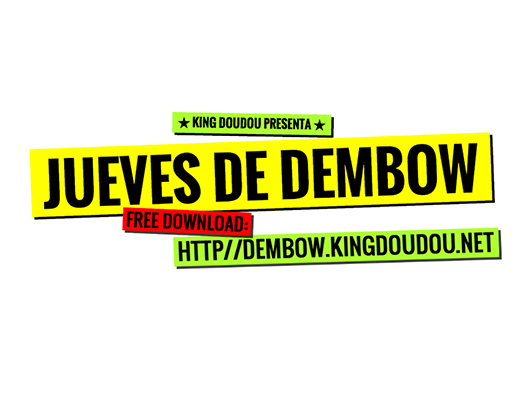 Jueves de dembow, this is your new weekly appointment with King Doudou! This summer, it is therefore on this Caribbean rythme that King Doudou will groove you every Thursday, and for 4 weeks.

Then dembow, what is it?

It is a musical genre born in the 90s in the Dominican Republic, with roots in both the rap music in Latin American culture. Musically, the dembow has a very distinctive rhythm that is reminiscent of reggaeton and dancehall, but often a bit faster.

After cumbia, dancehall, reggaeton and trap (we will talk to you about that soon), it is dembow that the powerful King Doudou revisits. The principle of Jueves de dembow? Every Thursday King Doudou will publish a new prod combining the original rhythm of dembow with other musical styles. Released on Thursday 16th, the first piece of the series Jueves de dembow is entitled Cucurucho (which in Spanish in the text refers to the cones, these biscuits that support the ice, hence the ice on the artwork). With this title, King Doudou combines dembow with elements from the Baltimore, Jersey Club style. A very rich and efficient mixing! Listen to it right here ↓

The second volume of the series Jueves de dembow is entitled  Cachetona, that means, in spanish, “chubby”, but it is possible that, in that context (and with the meaningful artwork), the title refers to an other kind of cheeks. On this track, King Doudou used a dembow rhythm a bit faster and harder than the first one. Cachetona is inspired by raptor house / changa tuki (musical styles of Venezuela) and circuit music from Mexico, as King Doudou said himself. One more time, this is a very great exploration of popular music made by our man!