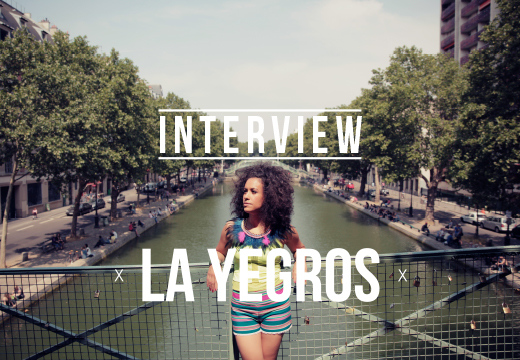 Among the actors of the nueva cumbia scene, if there is an essential artist who has already successfully established herself in Europe, it is La Yegros. Honestly, I discovered her during my stay in Mexico via a remix of her hit Viene Mi performed by Colombian Cero39, while in France the Radio Nova was already playing her stuff regularly … whatever, during her last visit at La Bellevilloise, thanks to El G, founder of ZZK label that has revealed La Yegros, we were able to meet the young singer. Mariana Yegros speaks to her influences, her unexpected success and her love for the French capital. Meeting. 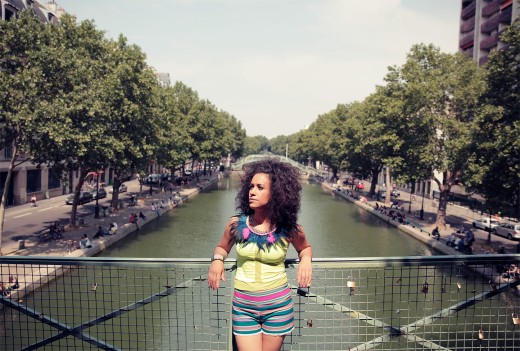 CxC: Hi Mariana! Can you introduce yourself to the readers of Couvre x Chefs?

CxC: Music has always been something important in your life? What have you been listening to since you were young?

La Yegros: Music has always been something very important to me. I was not born in a family of musicians, but I have always loved music. My father listened to chamamé, which is music with rhythms of northern Argentina, Misiones region precisely. My mother listened to a lot of cumbia… these rhythms with which I grew up, that I developped ​​and I have listened to throughout my life. Growing up, I started listening to music from India, Africa… I made my own way with the different styles that I liked and that I use today to inspire me to compose my own songs.

CxC: How long have you made music for? How did you start?

La Yegros: I joined the Conservatory of Music of Morón in Buenos Aires. This is a great conservatory, very recognized. I started by studying opera singing etc… then I got the chance to be part of the De La Guardia, a theater and dance band. I was in the cast, I was chosen and I was able to perform for the first time in front of 15,000 people. It was a very important moment for me, it was the beginning of a magical career! It is precisely at this moment that I felt that this was what I wanted to do with my life: to be a singer and live from music and my songs. I left the conservatory and I started to compose my own songs that were more in line with what I wanted to do: inspire me of primitive music, folk, India, Africa …

CxC: Your music combines influences such as reggae, folk, dancehall … and chamamé! What are your inspirations?

La Yegros: On the disc and in the project there are three composers: I make ​​a part, King Coya and Daniel Martin compose the music. The latter is the one that composed Viene de Mi by the way. My inspirations are mostly emotions of the human being such as joy, sadness, loneliness… those are very deep moments of life I want to express and that I identify myself to… and it’s great that the public also identifies to what I sing!

CxC: How do you compose your songs? Are you still working with the same people?

La Yegros: Yes I am. In fact, either everybody compose on their side, or we make them ​​together, it depends. Sometimes one of us writes the lyrics, and then sends them to King Coya or Daniel Martin for them to compose music. Nobody changes the words of others, when someone writes a text, it remains unchanged. Speaking of which, today (note: the interview was conducted May 28, 2014 at Bellevilloise in Paris) we will interpret for the first time a new song composed by Daniel Martin called Chicha Roja.

CxC: I am under the impression that the movement digital cumbia is highly developed in Argentina … how is it perceived there? Is it still an underground thing or has it been democratized?

La Yegros: Electronic cumbia (or digital) remains an alternative, more underground, it is not yet a popular music that everyone knows. This is a very very young contemporary movement … it plays and dances to in the places that remain underground.

CxC: Tell us a little about your collaboration with King Coya and how did you start working with ZZK?

La Yegros: It’s thanks to King Coya that the name La Yegros arose, he is the one behind the project. He was already known as a producer under the name Gaby Kerpel in Argentina when he wanted to create an alter-ego: King Coya. With this new project he started making electronic music mixed with cumbia and he invited me to sing at his concerts. One day we went to Denmark, Roskilde Festival. The reception and the connection was made between the people and my songs were incredible. This is where we thought about making a record. After the festival, ZZK (Author’s note : the most influent cumbia digital label from Argentina) asked me to work together to create an album with them. Four years later came out the LP Viene Mi.

CxC: Who are your favorite artists of this movement? From ZZK or elsewhere!

La Yegros: There are 10 of us in ZZK: King Coya, Chancha Via Circuito, Tremor, El Remolón, Frikstailers… most of them are music producers. The only group on the label is us, and the only woman singer is me! Each artist has his/her own universe, all proposals have similarities, but everyone has a style of their own. I love them all.
Among them, I really like Bomba Estereo, I think they have something in common with us: they mix electronic music with cumbia from their region of Colombia. I also like a singer called Rita Indiana who is from the Dominican Republic, she mixes electronic music with primitive rhythms like merengue.

The big hit Viene de Mi : the love for Paris

CxC: How would you define the impact that your song and your album Viene de Mi have had in your life?

La Yegros: Simply, this song has changed my life. At one point I said “a desired light tortuous light in the desert, has changed my life” (Author’s note: VO “una luz, querida, una luz en el desierto torcida that cambio mi vida”). I simply, well I was not in the desert, but this song has changed my life. Honestly I did not imagine at all nor had I hoped that this would happen! I believe it is just because it happened in those circumstances that I seem even stronger. We never did the album thinking to tour, so long, so far… that this project grew that much moved me a lot and I try to enjoy as much as possible and be aware of what is happening to me. I take a lot from the public and thank everyone warmly whenever I sing this song … because I know that many of them came to listen. For me it is always a very special moment of the concert, I know that it is thanks to this song that we’re here.

CxC: What do you feel about the idea of ​​playing in Paris tonight?

La Yegros: This city is very special to me among all those where we’re playing, and it is also in my life in general. In the future I think Paris represent a lot to me because it is the city that has opened the doors of Europe. For me it’s very special to play here, it is very moving, beautiful people with us, there is a kind of feeling. Play in Paris inspires me a lot, I love it, I’m very happy.

CxC: Even tough you are part of a cumbia digital label, you have a band of musicians, with whom are you going to play tonight?

La Yegros: Percussion and electronic parts are played by Gabriel Ostertag, guitar by David Martinez and Nico Deluca is our accordionist.

CxC: Will you sing other new songs tonight?

La Yegros: Yes the song Chicha Roja that I spoke to you before … and we are already composing for the next album which we will include 5 or 6 new songs in our set since last month.

CxC: What are your plans for the future?