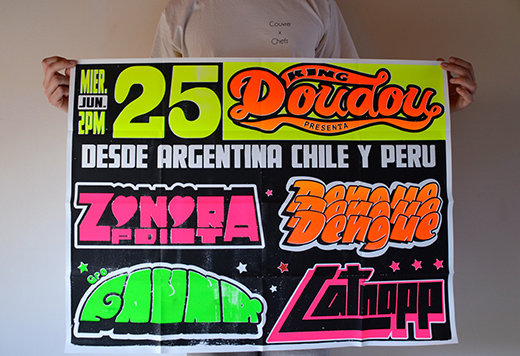 This morning in the mailbox I found a fantastic package from the postman in which there was the first EP from King Doudou: KD Compil #1!

The King answered a few of our questions not so long ago; do not hesitate to repeat yourself a little by reading the interview.

Once is not custom, before talking about the music in this album, talking about the subject: the self-proclaimed King, the chief of global music has made it big in this first release in full independence. Indeed, the CD took the appearance of a miniature vinyl and comes in a small transparent bag on which are printed credits and in which we find a size bonus: the poster announcing the release of the same EP. The specificity of this post? A large reference to the events of Cumbia found in South America, especially Peruvian chicha. The stage is set.

This first compilado consists of 4 tracks produced in collaboration with Dengue Dengue Dengue, Fauna, Zonora Point, Catnapp, and a remix. Doudou King planned to go exploring the rhythms of various parts of the world and his first stop is Latin America (as you had guessed).

It is with Peruvian homies Dengue Dengue Dengue that King Doudou opens the ball on the title Labios, consisting of a rhythm of cumbia mixed with a salsa loop slowed down.
The duo Fauna label ZZK Buenos Aires joined the great guru of the tropics on the second title: Danza del apareamiento mating rich evidence of the multiplicity of influences suggests the meeting between King Doudou and Argentine. A hymn to the body, with dance background rhythms flirting with reggaeton complete with electronic experiments.
Third track: Pon Pon, with Chilean of Zonora Point, is the kind of song we’d like to bring to full volume in a good soundsystem, on a hot summer day. On an instrumental dub, led by Chilean James Manuel delivers unstoppable chorus of EP rapping the merits of the substances contained in the “Pon pon”.
Meow is the junction point of the universe King Doudou and Argentine Catnapp created a hybrid between jungle and dub, as unlikely as it is ingenious.
Finally, to close the King gives us (in the bonus version!) his remix of Peruvian Cumbia Amazónica legendary group Los Mirlos … ¡a bailar!

The full physical bonus edition is available right here, but be quick, only 50 copies are pressed!